How do we know about Roman food? – waterlogged plant remains

Archaeologists learn about Roman food from a range of sources; mosaics, wall paintings, artefacts, written evidence, and bioarchaeological remains of foodstuffs. Plant foods, such as fruits, spices, cereal grains and pulses, are found at archaeological sites due to four types of preservation. These are charring, desiccation, calcium-phosphate mineralisation and waterlogging (see the glossary).

Waterlogged plant remains have provided archaeologists with some of the best evidence for plant foods in the north-western Roman Empire, showing that a wide range of new herbs, fruits and nuts were adopted. When plant remains are discarded into permanently wet places, they do not decay as they would on the ground surface or in compost bins. Waterlogged conditions are referred to as anaerobic, meaning there is no oxygen present. Bacteria, which would usually decay plant tissue, need oxygen to survive – without this, a wide range of plant remains can survive for thousands of years. These include ‘delicate’ remains such as celery seeds, box leaves, straw and bracken. Plant remains like this very rarely survive by charring (carbonisation).

Waterlogged conditions are found at 2 types of archaeological sites: 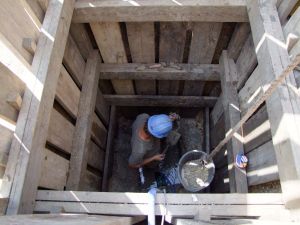 A Roman well under excavation at Silchester (the Roman timber lining can be made out underneath the diggers feet – the timber shoring is modern!)

Samples of sediment taken from wells are processed using a flotation tank to extract the plant remains. Plant remains usually float on the surface of water, and can be collected in a sieve with a mesh size of 0.25mm.

Flotation of samples at the Silchester ‘Town Life’ Project

The ‘waterlogged flot’ from samples is then taken back to the lab and sorted under a microscope. Seeds and other plant remains like leaves, buds, cereal chaff and fruit stones are removed, and identified by comparing them to seeds in a modern reference collection. This is  a lengthy process, but the results can tell us about the fruits and flavourings consumed by different communities who lived within the Roman Empire. We can also learn how diets change over time, and even how they varied between households!