Medlars are interesting for two reasons: One, they were eaten in some parts of the Roman world, but aren’t one of the foods popularly thought of as ‘Roman’, like figs and grapes. Two, very few people know of these strange fruits today.

Medlar is a tree in the Rosaceae family (includes roses, hawthorns, blackberrys, cherries etc.), quite similar to apple and pear. It originally grew wild in Asia Minor, and it was domesticated in the Near East or southern Europe (Dalby 2003). The fruits have a distinctive appearance, and a distinctive means of preparation. They have to be ‘bletted’ or left to rot until they are brown, soft, and surprisingly tasty.

Medlars are mentioned in ancient texts, although it’s not clear whether they are separated from hawthorn fruits (Dalby 2003). Strabo mentions them in Geographica (16.4), where he is writing about the Nile Delta. Pliny describes three varieties of medlar (15.22), and states that the tree was not known in Italy in Cato’s time (2nd century BC). Later, Palladius described how medlar fruits were preserved in honey (Pallidus. agric. 4, 10, 22).

Although medlars were clearly known of in Roman Italy, they rarely turn up in archaeobotanical samples, even though the pips are pretty tough, and would survive well. The woody pips haven’t yet been found in Herculaneum or Pompeii (Meyer et al. 1980; Murphy et. al. 2013). In Roman Britain, they have only been found from Roman Silchester. Two stones were identified by Clement Reid from samples taken from Insula XXXIII in the south-east of the town, where the public baths were located (Reid 1905). Medlar was not identified from Roman Switzerland until far more recently. 19 seeds were found in a wooden basis full of rubbish, next to a stone buidling at the Roman vicus of Tasgetium in Eschenz (Pollman and Jacomet 2012).

Medlar has been found from more Roman sites in Gaul. Interestingly, these also include charred medlar seeds from a cremation burial in Corseul (Ruas 1990), showing that medlar was used in funerary offerings alongside apples, dates and olives. Medlar stones have also been found from the eastern Roman empire, from 4th-6th century AD deposits in the harbour at Caeseraea (Ramsay 2010).

Medlar seeds have been found from across a wide area in the Roman world, yet they are actually very rare compared to other fruits which were taken into cultivation, like apple and plums, and they are far less common than imports like fig. This probably means that medlar fruit were traded as exotic foods in the Roman world. Medlars became far more popular in the medieval period, but have again become rare. Today in Britain, medlar is most commonly encountered in jam, which is meant to be good with game! If you’re interested in growing and bletting your own medlars, have a look at this great blog post. 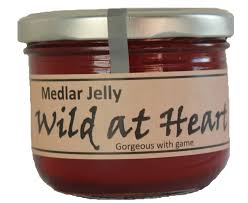 Ramsay, J. 2010. Trade or trash: an examination of the archaeobotanical remains from the Byzantine harbour at Caesarea Maritima, Israel. International Journal of Nautical Archaeology 39(2), 376–382.